The meat goat business is growing, and it is fueled by a growing demand for goat meat by an ethnic population in Florida. When someone becomes interested in goat production or wishes to select a breed for his or her farm, one of the key questions is which breed is the best for meat production. Each breed has its advantages and disadvantages depending on the local conditions where it is grown. Selecting a breed is based on the growers’ preference and management ability. A brief description is provided for the Spanish Meat goat, the Boer goat, the Kiko goat and the Myotonic goat. Please bear in mind the information is based on averages. It may vary by regions, feeding and management practices. 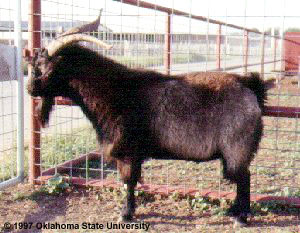 It is believed that the Spanish meat goat came from Spain to the USA through Mexico. It is known as the wood goat in Florida. The size of this meat goat varies with climate and terrain. They have horns and the color of their coats consist of a variety of colors and pattern. They have small udders and feet. These anatomical characteristics make them very good range animals. The buck weighs about 100 lbs. but can weigh up to 180 lbs. The does weigh an average of 70 lbs. and can weigh up to 120 lbs. They breed out of season. 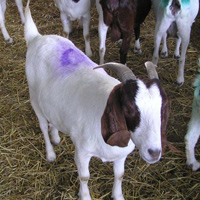 This breed originated in South Africa but was imported from New Zealand to the USA in the 1990’s. They have heavy muscle and reported daily weight gain ranges from 0.3 lbs. to 0.4 lbs. per day. The adult male weighs about 250 lbs. and the female about 140 lbs. The yearling male weighs an average of 100 lbs. and the yearling female approximately 80lbs. They have a non-determinate breeding season. Research in New Zealand reported that nutrition has a greater effect than light/dark cycle to Boer goat to breed out of season. The kidding percentage is approximately 200 percent.

This breed was imported from New Zealand in the 1990’s into the USA. Their coats are generally white but can be any color from white to black.  They have large frames and are known to mature early. In developing the breed, the does were selected for their hardiness under range conditions with no kidding assistance, their mothering ability and their ability to have twins annually. They are generally well suited for meat goat production under humid and subtropical conditions.   On average, the does wean approximately 1.6 to 1.8 kids with an average litter weight of 62 to 67 lbs. at 90 days old. This breed is generally more resistant to internal parasites, especially the barber pole worm, than the other breeds. 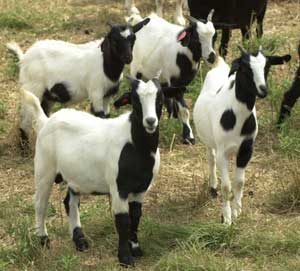 This breed is indigenous to the USA, but its ancestors can be traced back to four goats that came from Nova Scotia. It is also known as the “faint goat,” and the “Fall-Down Goat.” It is a muscular animal with heavy rumps and deep chests. It has a variety of colors with the most common ones being black and white. It breeds out of season, and does produce two kidding’s per year in many herds. It produces good crossbred offspring’s with the Boer breed.

Reproduction in goats is influenced by day length i.e. how long or short the days are.  In Florida, the days begin to shorten in fall and this brings does in heat or estrus. In late spring or early summer the length of the days begin to increase and ends with the longest day of the year in June 21st-22nd. The time between late spring and the longest day of the year is referred to as the “out of season” period in goats. Few kids are likely to be born from August to November. Consequently, producers are not able to provide a regular supply of goat meat throughout the year.  Some goats have the ability to breed out of season. It is important to select goats with the ability to breed out of season.

Meat goats may breed as early as five months as they reach sexual maturity between 5-9 months. Breeding young goats too early may be problematic, and so it is recommended that they be bred at 60-65% of their adult body weight or at 12 months of age. Meat goats come in standing heat or estrus every 20-21 days during the breeding season. The period of standing heat lasts for 24-36 hours. This is when the does are more receptive to the buck. Breeding behavior varies among individuals, herds and breeds. It is important to recognize when does come in heat so that they are bred early. Missed heat or failure to conceive early during the breeding season means that more feed has to be provided for the does that are not productive. In the tropics goats recycle or come into estrus throughout the year. Estrus is recognized when the does becomes nervous with the following signs. The tail is likely to shake, there is frequent urination, bleating, or swollen vulva discharge. The gestation period (time from conception to birth) ranges from 147 to 155 days with an average of 150 days. Many producers allow their buck (bellies) to run with the does (nannies). If your plan of the farm is to produce kids at a certain time of the year, then it may be advisable to introduce the buck to the does at a specific time of the year. In addition, introducing the buck stimulates recycling which is a natural way of synchronizing estrus.