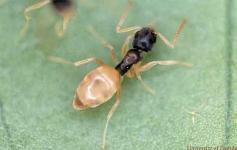 Ghost Ants are tiny ants with a dark head and thorax and a pale abdomen. Ghost ant colonies are found in switch plates and electrical outlets and in other dark voids. They can nest either outdoors or indoors. Colonies of ghost ants have many queens. The workers are small and difficult to see, but one can follow trails from their nest to food. Ghost ants can tend aphids and are considered sweet-feeding ants. 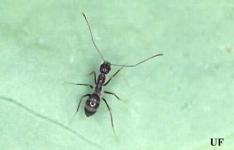 Crazy Ants usually nest outdoors in mulch, wood, debris and soil; however, they can also nest indoors in dark voids. Colonies of crazy ants have many queens. The workers are small, dark brown ants that often run about erratically. They follow trails although their erratic behavior makes them difficult to follow back to the nest. Crazy ants can tend aphids, feed on honeydew, and are considered sweet-feeding ants. 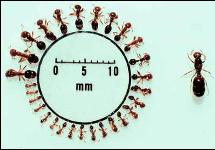 The Imported Fire Ant lives in mounds usually located outdoors on the ground surface.  Sometimes colonies can be located in debris on the flat roof of commercial buildings. The ants have a well-developed stinger and can inflict a painful sting. Colonies of imported fire ants usually have one queen; however, multiple queen colonies have been found in many parts of Florida. Fire ants prefer to feed on oils, and fire ant baits are the best method of control. 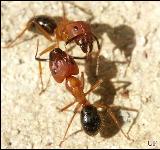 Carpenter ants are large ants that nest in hollows of wood. The nest is usually associated with wood decay or termite damage in a house. Outdoors, carpenter ants nest in mulch or debris.  The Florida carpenter ant is colored red and black. Carpenter ants do not consume wood; they hollow it out for nests. Control is best achieved by following the ants back to the nest. The nest can then be treated with insecticide. 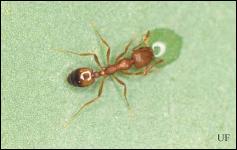 Pharaoh Ants nest in dark voids inside or around structures. Usual nest locations are wall voids, behind molding, in insulation in refrigerators, in cardboard, between sheets of paper and in soil of potted plants. Electric outlets and switch plates are excellent areas for Pharaoh ant nests. Pharaoh ant colonies have many queens. The workers are small yellow ants that follow trails from their nest to food. The best control is obtained with Pharaoh ant baits.