Natural area weeds are plants that interfere with the functions of natural communities and displace native species. These weeds are often exotic plant species that have become naturalized and can spread without human cultivation. Natural area managers remove invasive plants to maintain the integrity of natural areas.

Air potato is one such non-native, invasive plant. This vine can grow eight inches a day and produces large numbers of potato-like growths that sprout new plants. 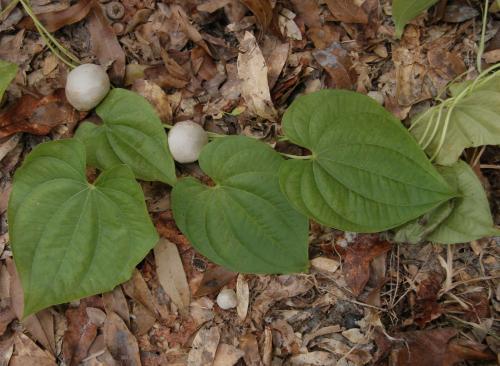 What is an Air Potato?

Air potatoes are members of the yam family and native to Asia and sub-Saharan Africa. Air potatoes can now be found throughout Florida as well as in Louisiana, Mississippi, Texas, Hawaii, and Puerto Rico.

Air potato was added to the Florida Department of Agriculture and Consumer Services' Noxious Weed List in 1999. Plants on this list may not be introduced, possessed, moved, or released without a permit. 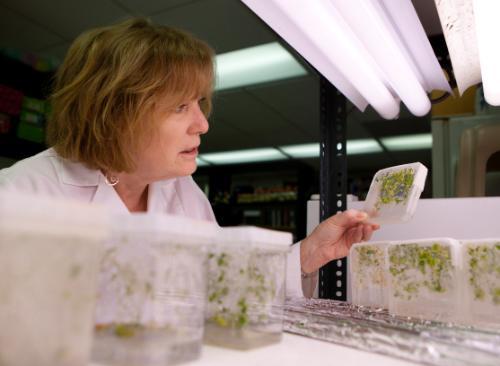 Air potato is an herbaceous vine that sprouts from underground or aerial tubers. Its stems can grow up to 70 feet in length. The stems are round or slightly angled in cross section and twine to the left (counter-clockwise).

The leaves are alternately arranged along the stem and attached with long stalks. The leaves can grow at least eight inches long and are nearly as wide. Also, the leaves are heart-shaped and basally lobed, tapering quickly to a point at the end of the leaf.

Aerial tubers (bulbils) form in leaf axils. In Florida, bulbil texture and color are variable. Some bulbils are warty while others are smooth, and their color can range from a light tan to dark brown.

Although air potato rarely flowers in Florida, the plant can produce small, fragrant flowers that arise from the leaf axils and grow in loose clusters up to four inches long. Male and female flowers are found on separate plants. No fruits or male flowers have ever been observed in Florida.

For pictures to use when identifying air potato vines, visit the Center for Aquatic and Invasive Plants’s page on air potato.

Winged yam is another non-native invasive species, similar in appearance to air potato. Like the air potato, it forms aerial bulbils and underground tubers. However, the winged yam’s stem twines to the right and is winged or angular, and the bulbils tend to be more oblong.

Florida does have two native wild yams that are found in the hammocks and floodplains of North and West Florida, D. floridana and D. villosa. These plants never form aerial tubers, and their leaf blades rarely grow to six inches in length. The native species are smaller plants whose vines reach only about 10 feet. Air potato vines can easily grow to six times that size.

How Does an Air Potato Spread? 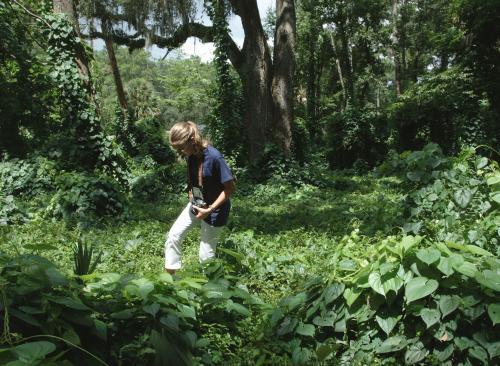 Flowering is rare in Florida, so most new plants sprout from aerial tubers (bulbils).

These bulbils can be the size of small marbles or as large as softballs. They grow along the vines and are found on plants during fall. The bulbils drop from the vines in winter (December to February) and sprout in spring. They can be carried over long distances by flowing water.

This versatile plant invades a variety of habitats, including pinelands and natural area hammocks. It can quickly engulf native vegetation in natural areas by climbing high into mature tree canopies.

Air potato is extremely difficult to eliminate because new plants sprout even from very small bulbils and underground tubers.

Removing Air Potato from Your Property

You can help protect Florida's natural areas by removing air potato around your home. Locating and removing bulbils is easier during winter months when plants are dormant and vegetation is less dense.

When air potato vines are growing up into trees or are mixed with desirable plants, cut or pull down the vines and destroy them. Remove as many bulbils as possible since those left behind will produce new vines.

Destroy every part of the air potato plant, including the bulbils, in a way that will prevent the vines from spreading to new areas. Burning is recommended if local restrictions permit it. Check with your local landfill to find out if they can incinerate the vines. Bulbils can also be killed by storing them in a freezer overnight.

Any remaining air potato plants should be sprayed with an herbicide solution in spring and early to mid-summer when the plants are actively growing. Several follow-up applications of herbicide will be necessary throughout the growing season and possibly in successive years.

Glyphosate is currently the best product for controlling air potato. Glyphosate will cause most of the bulbils to shrivel up and die. Manually removing the bulbils in winter is recommended to take care of any that may have survived.

Apply herbicides late in the season. Adequate coverage is important; spray the vines almost to the point of run-off. Glyphosate is absorbed through the leaves, so try to cover as many as possible. Spray the plants as high as you can reach, but try to avoid overspray and drift. If the vines grow too high to reach with an herbicide sprayer, pulling them down might be your best option, but this method may not be practical for large infestations.

Herbicides must be applied according to instructions on the label. If you are not trained in herbicide application, contact your county Extension office for information about training opportunities. It may be easier to hire a vegetation management contractor to remove air potato from your property. Your county agent should be able to recommend reliable, licensed contractors.