Composting with worms – also known as "vermicomposting" – is the process of using worms to produce rich compost from kitchen wastes. One pound of worms can turn 65 pounds of garbage into garden compost in 100 days. It is the way to go if you live in an apartment or if you generate mostly food scraps. 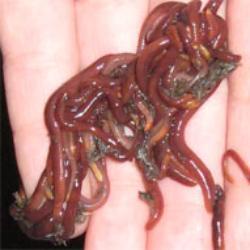 If you want to set up your own vermicomposting system, simply follow the steps below. Click any step below to learn more (show all steps). 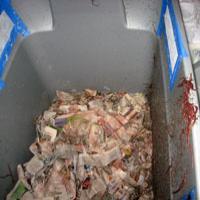 Step 2: Vermicompost! Care for Your Worms

One pound of worms can process half a pound of kitchen scraps each day. Feed them daily, weekly or as desired. Cutting the scraps into small pieces allows the worms to consume them faster. Bury the scraps under the bedding; rotate where you bury them. You may add more bedding every once in a while.

The ideal temperature for worms is between 60-80 degrees F. So, place the bin in a shady area, not in direct sun.

Check the moisture when adding kitchen scraps. If it is too wet, add more bedding; if too dry, add water. Worms like more moisture than you might think. Experiment with the moisture levels to find your best results.

Keep the lid on your bin. Worms do not like light, and the closed bin will not attract flies. 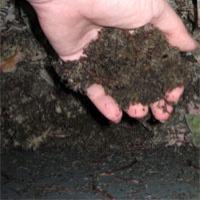 After two or three months, the worms will have converted the bedding and food scraps into a rich, dark compost. there are two ways to harvest it:

Share some of your worms with others and/or return them to the bin filled with fresh, moistened bedding. Add one cup of soil or sand and some food. Begin again!